Trending
You are at:Home»Gaming & Electronic Toys»Video Games»5 great indie games for under $15
By Brian Vaughn on October 21, 2011 Video Games

Need some new games but don’t want to spend a lot? Xbox Live Indie games will fit the bill and your budget.

I’m a cheapskate gamer. My attention span for video games is often too limited to invest a lot in a game. Sixty dollars for a video game is a lot. Fifty dollars for a game is a lot. Heck, if you ask me, $30 for a game is pushing it. Thankfully today’s gaming landscape offers a ton of ultra-cheap entertainment, and even though I have a computer and a smartphone, I’ve invested more on Xbox Live Indie games than any other platform.  I have more than 30 indie games in my library, and most of them cost less than $5.

It’s unfortunate that there’s been a lot of news lately about game developer’s abandoning Xbox Live Indie games (XBLIG). Most reports talk about how hard it is to make money on the platform, but their biggest complaint, which is not hard to see, is the lack of support from Microsoft. Microsoft doesn’t do much to promote indie games or give them exposure, which is not only unfortunate for those trying to make money but also for gamers because there are a lot of good games out there that don’t cost a lot.

I admit that it can be extremely hard to find quality games on XBLIG because there is a lot of crap out there as well. For every decent game worth a dollar there are a dozen avatar games and back massagers. Wading through the XBLIG library is a test of patience and requires a lot – and I mean a lot – of trial and error. You also have to put aside some of your retail game standards and expectations when it comes to indie games. Indie developers obviously don’t have the resources to make huge games, so you’ll often find things like graphics and sound to be kind of lack luster. But if you can get past that you’ll find some really good games that are worth far more than the few dollars you’ll pay.

Thankfully for you, I’m here to help. In no particular order, here are five of my favorite Xbox Live Indie games that won’t disappoint. Five games for less than a dinner for two.

This is one game that is hard to find, not because of Microsoft, but because of the title. The game is called Protect Me Knight in English, but the game is listed online under its foreign name, which is a bunch of Japanese characters, so it’s not easy to find even alphabetically. However, this is one game you don’t want to miss because it’s a lot of fun. 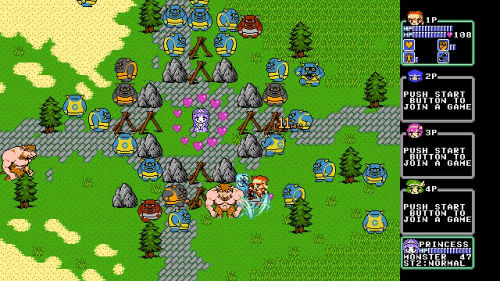 Protect Me Knight, once again trying to save a princess.

Not unlike tower defense games you’ve probably played, like Plants vs Zombies and Defense Grid, Protect Me Knight pits you against oncoming hoards of monsters, but unlike all those other titles this game gives you complete control over your character. You pick your character class, each with their own strengths and weaknesses, naturally, and then do you best to protect the princess from being captured by waves of trolls, ghosts and cyclops. The game is made in the retro 8-bit style and it works wonderfully. Pixel games like this is what indie games do well. When indie games try to do 3D graphics or anything “modern” it just looks hacky and old…retro pixel art will always look good when it’s done right, and Protect Me Knight does it right.

Protect Me Knight is incredibly hard playing by yourself, but thankfully it has local 4-player support and if you can get one or two friends to join in, it is a lot of fun that will take you back to your late night Nintendo days. This game kept me playing solo for hours and days on end, not only because it hit a great nostalgia nerve, but because it was just a lot of fun. It’s a somewhat unique game that seems simple but provides a lot of challenge. No matter which way you throw your ax, Protect Me Knight is well worth the $3 price tag.

One of my favorite game genres is the arcade shooter, first popularized by Space Invaders. However, shooters have come a long way since those early arcade days and Vorpal is wonderful title that will challenge even the most experienced shmupper. I’m not going to lie, Vorpal isn’t a Ikaruga, Gwuange or even Space Invaders Extreme, but it’s not trying to be.

Vorpal is a bullet hell style shooter that is all about dodging bullets while trying to shoot the bad guys. In this case, you’ll be fighting only one bad guy at a time. The game’s story is set up as a head-to-head fight between characters, and you’ll have to go through several bosses to finish the game, though it won’t be easy. The bullet patterns are challenging, the visuals are solid, and the music sets the mood wonderfully. Vorpal might not be flashy but it shmups where it counts.

You won’t find a lot of depth in Vorpal, but hey, it’s a shooter, what do you expect? What you will find is a great little shmup that will give you hours of play for only a dollar. That’s right. One dollar.

One of the first games I fell in love with was Arkanoid, a popular Break Out-style game released in the arcades and on Nintendo. Since then, Break Out games are a dime a dozen and most of them aren’t very good or even interesting. Wizorb breaks the mold a bit by putting in a few more chips in the pot. 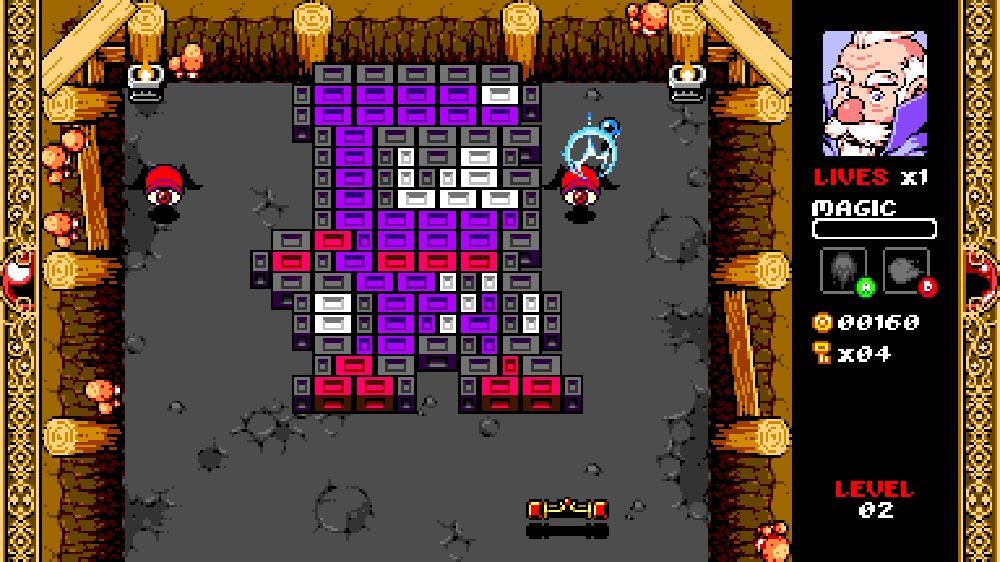 Use your magic to keep the ball bouncing in Wizorb.

As the name might suggest, you’re a wizard and your quest is to save the kingdom from peril, and the only way to do so is to keep your magic ball bouncing. To help you keep things going you’ll get a few magic spells and items, all of which must be used at just the right time…and of course, your magic power is limited so you can’t go crazy. Like any good Break Out game, in addition to keeping your ball in the air, you also have to collect power-ups that fall from the bricks, but in Wizorb the power-ups are needed to help rebuild the kingdom. I’m hesitant to call this an RPG mechanic, but there’s actually a little story going on here and that makes Wizorb stand out amongst the rest.

Also helping Wizorb stand out are some very well done 8-bit graphics and an equally impressive chiptune soundtrack that will satisfy any retro gamer. Wizorb is a good challenge that will keep you working for hours and remind you just how much fun games like this are. And did I mention Wizorb is only $3? That’s less than a can of Red Bull.

Soulcaster puts another spin on the tower defense genre. This time you’re a wizard that can cast different types of characters anywhere on the board in efforts to stop the attacking monsters. At your disposal is a pretty typical spread of offense that includes close range, medium range, and long range attacks. What’s great about Soulcaster is that there is more than one way to survive and pass each level.

Soulcaster is pretty straight forward and doesn’t really provide many surprises, even the retro graphics aren’t what they could have been, especially in the company of other games in this list. But the game mechanic of casting “souls” where you want to defend yourself is pretty interesting and plays out really well. You’ll play through Soulcaster pretty quickly but it’s a title that will keep you playing until you’re done. Even with its minor flaws, it’s well worth the admission price of only $3. And hey, if you finish and still want some more, you always got Soulcaster 2! 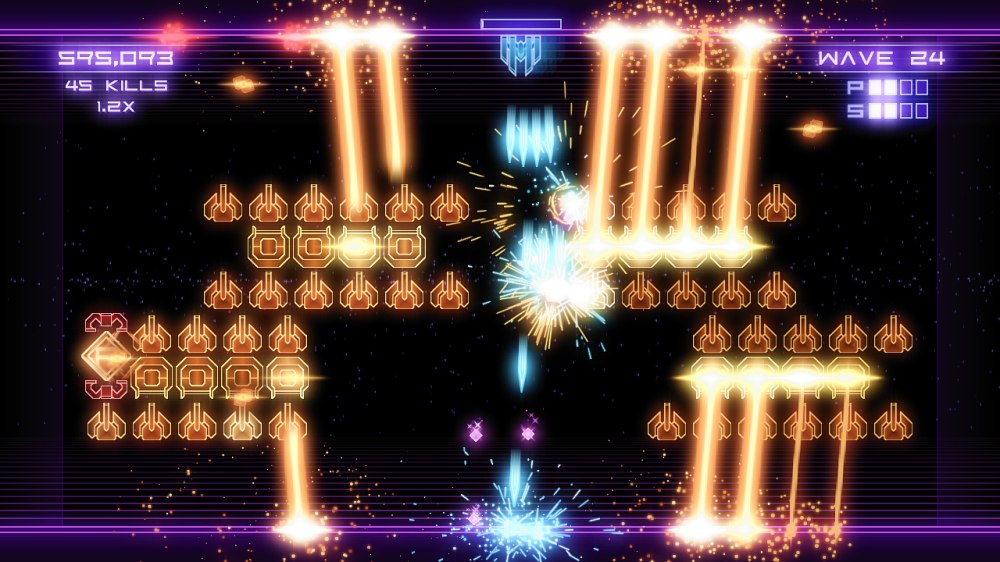 Crossfire, taking you back to the arcade.

This is another arcade shooter that comes from developer radiangames, one of the more successful developers that you may also see on the PC and iPhone store. The studio has several Xbox indie to its credit, and they’re all really good, but none of them hooked me quite like Crossfire.

The unique mechanic in Crossfire is the ability to warp to and from the top and bottom of the board. The Space Invader-ish bad guys sit in the middle and do their best to shoot you but they rotate, requiring you to carefully navigate north and south to survive. This might not sound like much but you’ll find the challenge builds quickly and the speed at which the games moves really keeps you on your toes. And if you want some real arcade action with Crossfire, hook up your joystick and you’ll feel like you’re right in the middle of Flynn’s arcade. At $5, Crossfire is one of the more expensive games on this list, but you’ll be hard pressed to find a more true arcade game in the indie library.

With so many gaming options out there, it’s great to have a resource as deep as the Xbox Live Inide games marketplace. I’ve talked about five games here but believe me when I tell you there are dozens of great games out there that will keep you gaming for hours on end for only a few dollars. Sure, you can spend $60 on the latest big box game and it’ll be fun for a weekend or two until you finish, but then what? Was it really worth your $60? Maybe…maybe not…but many of these indie games will keep you gaming for a lot longer, and for a lot less.