Trending
You are at:Home»Gaming & Electronic Toys»Video Games»How to Bring the Arcades Back
By Brian Vaughn on April 6, 2012 Video Games

Arcades are a relic of gaming’s past but everything deserves a comeback, and arcades are long overdue.

I didn’t win the recent Mega Millions lottery worth $500 million…and neither did you. But had I won my share of that prize, I would open an arcade (amongst other things). I haven’t been shy about my longing for the days of arcades, and not the scary arcades you probably remember, I want real arcades. Safe arcades, fun arcades. A recent article at Ars Technica proves that arcades can and do still exist, just not in America, and that’s too bad. But this isn’t going to be another rant about all the great experiences arcades bring with it, I’ll save that for another week. This time I’m going to talk about what I would do if I could start an arcade. I realize that it’s really easy to say “we need arcades” but what is a good plan for an arcade? If money was no real object, what would you do to get a new-age arcade off the ground? Here’s what I’d do. In my day you went to the mall to go to the arcade. If you ask me, malls don’t really exist any more (unless you consider Target a mall), so while I believe the mall would still be a good spot, lets assume that is not an option. Without a mall, I’d look towards the downtown area or business district because I would target people with jobs and with money – people like me. I work in an office building downtown and I have an hour each day for lunch. I usually spend that hour playing a game or trolling blogs online, but if there was an arcade within a four block radius you can bet your ass I’d be there everyday spending my hard-earned cash.

The over-21 crowd is the first crowd to hit up with an arcade because they’re the ones that might actually remember the first wave of arcades, so there’s a nostalgia nerve to hit. I wouldn’t look to the suburbs to setup shop because the home game market kills that in an instant. Once I’m home from a hard day at work or school, the last thing I want to do (or have time to do) is go back out to an arcade, especially when I have an Xbox or Playstation ready to go. It’s hard for an arcade to compete with the convenience of home consoles so you have to put them where gamers don’t have that luxury. 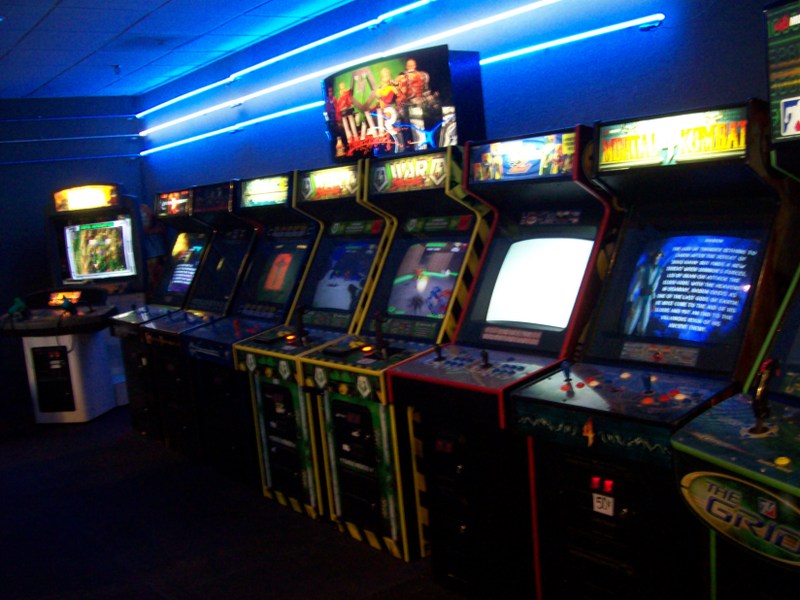 This arcade has some retro charm but it is not what we need today.

The last arcade you were in was probably dark, possibly smoke-filled, loud, and had its fair share of neon lights…to sum it all up, they were dingy and scary. I have my theories on why American arcades ended up that way but that doesn’t mean they have to stay that way. There’s no such thing as a quiet arcade but you can make an arcade bright and inviting and that’s just what I would do.

There wouldn’t be any black lights or broken neon in my arcade. It shouldn’t feel like your parents’ basement. There would be plenty of light so you could see everything and feel safe, and it would feel modern and fresh, but not too gimmicky. I wouldn’t make my arcade crazy retro but I wouldn’t make it some sort of hipster bar either, it would be a nice balance of the two. An arcade today needs to be comfortable but not quite coffee-house comfortable.

Build up, not out

This is an idea I saw in the 100 Yen movie trailer that sounds really smart. Real estate is at a premium in Japan so instead of building out, they build up. Many of the arcades there have several floors filled with games and that’s a great idea. Not only does it mean your arcade can have a smaller footprint, but it means you could organize and limit your arcade by floor. I’m thinking that you could setup each floor to serve different age groups. The first floor could be an all-ages zone but as you move up to the second and third floors, you get to the 18-and-up floors. Games know no age limit but you don’t want some ages mixing. I don’t want to be playing in an arcade with a 10-year-old kid any more than they want to be standing next to me, so give us both an option. You could also organize your games by floor if you had the inventory. Certain game genres bring in a certain type of gamer, so it might be good to give them each their own space. Department stores organize their stuff by floor, why can’t that work for an arcade? Like our very own Game of Death pagoda.

Games alone are not enough

Just having a decent collection of games in a room is not enough to make an arcade interesting these days. As I mentioned before, home consoles are way too convenient so if you want to keep people coming back to your arcade you need to give them a reason. This means you have do something with your games. I would spend a lot of time and effort organizing programs and events that incorporate the games.

Daily competitions, weekly tournaments, monthly meet-ups…the possibilities are near endless. I love it when I find an arcade game at some bar but that game alone is not enough to bring me back…but if there was some motivation in the form of prizes or freebies or even just recorded bragging rights, then I’d come back for more punishment. More than anything, arcades offer unmatched competition and that’s really the whole point of arcade games in the first place – to prove you’re the best. Never underestimate the pride that comes along with knowing you’re the best player in the city. All it takes is a little record keeping on the part of the arcade and you have instant loyalty amongst patrons.

You might also think that having a full bar in your arcade would be a good idea. I disagree. If you run your arcade right and bring in the right people, there will be enough drama in games and high scores that you probably don’t want to throw alcohol onto the fire. Plus the sheer presence of alcohol runs the chance of bringing in customers that are simply there for the drinks, at which point you’re operating a bar and not an arcade. I want gamers at my bar, not drunk, middle-aged hipsters. If I was going to serve anything it would be soda and energy drinks, maybe a few select snack items as well. Again, I’m not running a diner, I’m running an arcade. The classics are good to have but you need new as well as old (Flickr).

Arcade games don’t have to be retro

You can’t have an arcade without games, right? The first thing that might enter your head when you think “arcade” is classic arcade games, like Pac-Man, Galaga, and Asteroids. You might even extend that to silver age games like Mortal Kombat, X-Men, and NBA Jam. Those are all great options and they’re all cabinets I would want in my arcade but there are a ton of “new” arcade games being created that are just begging to be played in a social environment like an arcade. The only problem is that most of these games are console games or PC games. I’m not sure what it would take to be able to legally allow modern console games to be played in an arcade, but whatever it would take I would explore.

There’s no reason you couldn’t get some arcade cabinets and put a PC or console in them and play with a standard joystick and buttons. Imagine playing modern classics like Pac-Man CE DX on an arcade cabinet…or even the extensive catalog of indie arcade games being made, like Crossfire and Orbitron Revolution. I admit that the golden age games like Donkey Kong have some limited generational appeal and there are also only so many titles that people would want to play. By adding modern games to the mix you open up a whole new way to get people engaged and playing games, not to mention you might appeal to the younger-yet-adult crowd that doesn’t know what an arcade is.

Those are just a few of things I would do if I had the means to open up my own arcade. I don’t know if these ideas would work but I’d try. All I know is that if I’m wanting arcades to make a comeback, than a lot of other people do too…and if the few things that I outlined sound like a good idea to me, then they sound good to others. I’m convinced that arcades can make a comeback, even in a world of iPhone games and super-powered home consoles. The appeal of an arcade isn’t the games; it’s the people, the competition, and the experience. There’s no better feeling in the world than competing with a real person in a real space and coming out the better player, and the only place something like that can happen is in an arcade.