Trending
You are at:Home»Learning Toys»Board Games»Dungeons, dragons and giant robots
By Brian Vaughn on March 12, 2013 Board Games, Vintage & Classic Toys

A few years ago I was playing Dungeons & Dragons weekly with a group of friends. It was the first time I had really played D&D. I had a RPG-wannabe stage in junior high but never really sat to learn and play the game as it was intended…the most I did was have fun drawing weapons and throwing some fancy dice around. I was excited to actually learn how to play and while I was at it, I was making new friends to boot. Dungeons & Dragons literally brought people together.

Gaming was good for good year or more. We created our characters and struggled our way learning the ropes of D&D with help from an experienced DM. There were orcs, goblins, pubs and at least one stockroom full of cheese where we took refuge. There were a lot of laughs every weekend…but after many months things started to lose some of their magic. What happened? Along the way we added a few people to the group, which might not sound like a problem but in our D&D world, a single player’s turn would seemingly take 30 minutes. Multiply that by seven or eight people and you might see the problem…each person might only get turn per night before it was time to go home. Patience had worn thin and we had started fall out of love with our characters. It was time for something new. When you play D&D, you gotta have some mini figs!

The group, known near and far as “The Nasty Midnighters”, kept meeting up regularly to game but we never dove back into D&D. We tried some other RPG-ish board games, Settlers of Catan, card games like Fluxx and a few others that I qualify as “geek” tabletop games (not your standards like Monopoly, Scrabble or Risk). And while we weren’t going back to D&D anytime soon, we tried our hand at some tabletop wargaming.

Even though you have a book of rules, minis and a bunch of stats to keep track of, a game like Battletech is quite different than the catacombs and pubs of Dungeons & Dragons…and frankly, the lack of RPG in Battletech was something I was looking forward to. That’s not to say I can’t enjoy or appreciate a true RPG, but I just have a hard time really getting into character. Playing war with giant mech robots was far more interesting to me than demons and dwarves.

I’m not sure my enthusiasm was shared amongst the group but we all gave it a shot and I think it turned out pretty well. We used LEGO minifigs as stand-ins for giant robots…and frankly, it was pretty awesome since it gave each mech a distinct look. This was a new game for all of us so the last thing we wanted to difficulty keeping our robots straight. And like many wargames, the environment makes a huge difference. Buildings, hills and distance all play a huge part in the game and can even be used to your advantage for attacking and defending.

Getting things setup to play Battletech is pretty straight forward but keeping track of the stats is not a simple chore…but at least it looks cool. Each mech gets a stat sheet that you use to keep track of health, ammo and other things like overheating and abilities. One fun thing about keeping stats in Battletech is that each body part on a mech has health points. Each time you are successfully attacked – of course, determined by the roll of a die or two – you check off some points in the form of dots, not unlike those bubble tests you took in school. For example, your robot’s arm might have 20HP on the sheet and when you get hit with a laser blast it might cost you 10HP. You fill in 10 dots so you know how much is left and you’re on your way. Next time if you get hit, you might lose use of that arm but you can still keep playing. It feels a little less “all or nothing” than say D&D when you’re not exactly sure what can or will happen when you die. 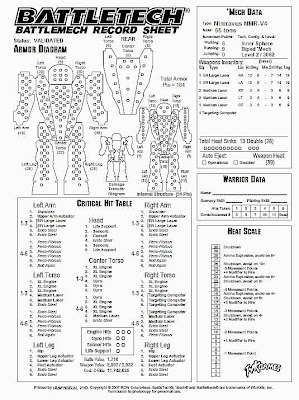 Even the stat sheet is cool

Another neat feature of Battletech is your ability to twist your mech so you can walk in one direction while attacking in another…just like you can do in the video games. So in some cases, you can attack while in retreat. This also plays an important role in defense since some sides/parts of your mech are stronger than others and you may very well have enemies on all sides, so you’ll want to make sure your strong armor is facing your toughest opponent while you try to attack a weaker one…or something like that.

Learning a new tabletop game is always a slow at first but Battletech was a lot of fun. It was refreshing after a year of wizards and warriors. I was so taken by the experience and play that I ran out to get myself a Battletech book so I could be ready for next time. I looked online to see what type of minis and accessories there were for Battletech and there are a ton! You can get as crazy as you want but of course that comes at a price. Being the cheapskate that I am, I decided to go lo-fi and make all my Battletech stuff out of paper. I got some heavier card stock from Staples and printed out a my own mech markers and buildings. There’s actually quite a community of players that use only paper to create their mech environments. I admit that paper isn’t as exciting or fun as LEGO people but it gets the job done and is essentially unlimited. You can check out my stuff over on The Morning Toast blog.

Maybe the days are gone when people instantly think of Dungeons & Dragons when they hear the term “tabletop game” but it really means anything you play…well…on a table! When I hear “tabletop game”, I think about games that require the kitchen table, a few hours of time, lots of pieces and a group of friends to get the most out of it. Dungeons & Dragons might be one of the original games that earned the “tabletop” moniker but it’s certainly not the only one. Battletech is also just one of hundreds out there to try.

And if you want to try out something new – or maybe get reacquainted with something old – don’t pass up on International Tabletop Day on March 30. Call your friends, find a table and play some D&D…or Battletech…or Star Wars RPG…or Warhammer…or…anything! Just take a day and enjoy playing in your kitchen or dining room. Leave the computer off and remember what it was like to play a real multiplayer game.